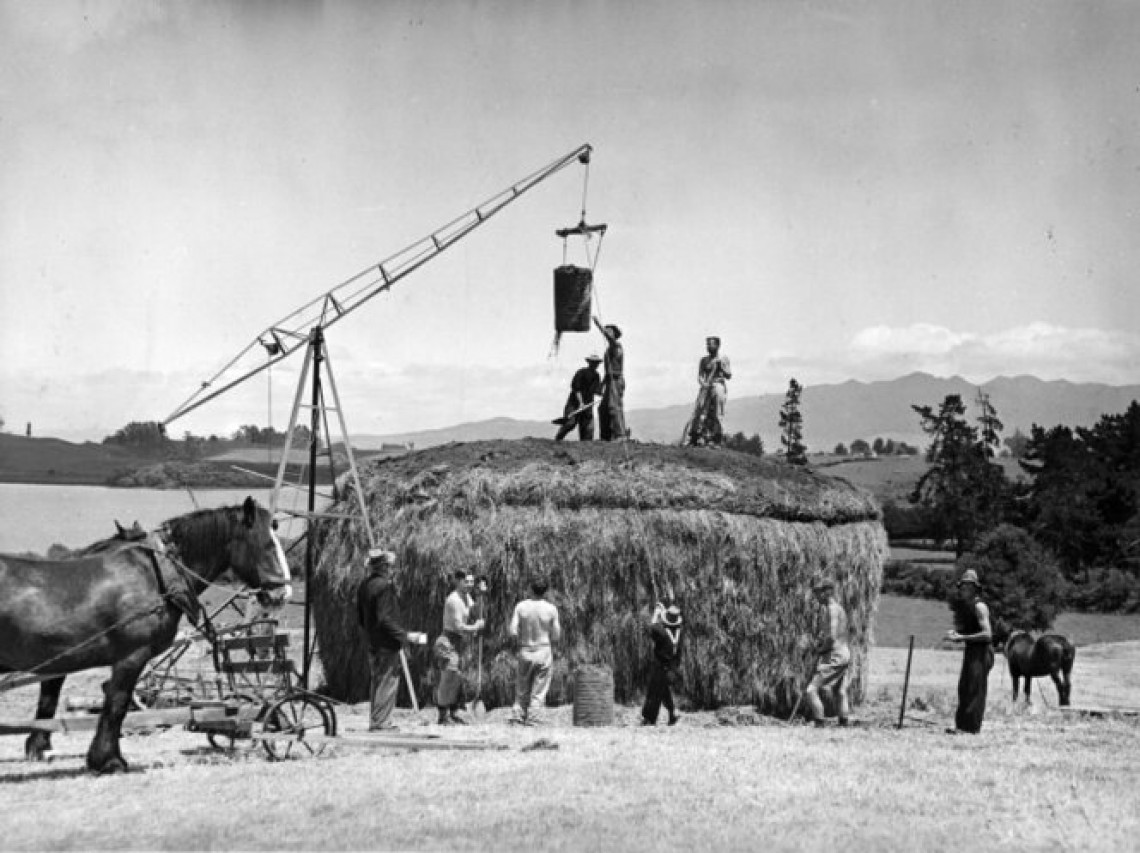 Somewhere in Frankton was a baled haystack that was the subject of several newspaper stories about “alleged immoral behaviour” in April 1944.[1]

On 24 April 1944, a 32-year old Cambridge woman was found drunk “after she visited the haystack the previous night with servicemen.” Earlier in the month two Māori men, originally from the Coromandel, were found asleep in the haystack. The following day a young Māori woman appeared in court charged with being idle and disorderly after police had discovered her sleeping in the same haystack.[2]

Why were the police so exercised by a haystack?

Police interest in Frankton’s baled haystack reflects growing public concerns about the erosion of social and moral standards during the Second World War.

Anyone who engaged in behaviour deemed an affront to public decency, morality and public interest could be charged with being idle and disorderly and subject to punishment, either up to three months in prison or placement in a borstal or reformatory.

Idle and disorderly was a catch-all term for social and moral behaviour that was believed to potentially lead to criminal conduct. As set out under sections 49-52 of the Police Offences Act 1927, it encompassed begging, wandering or loitering in public places, having no lawful means of support, and consorting with reputed thieves.[3]

I am particularly interested in the Frankton haystack because, in newspaper accounts, public immorality and potential criminal behaviour was directly linked to being Māori. It was reported in court that according to police the haystack had become “a favourite haunt of visiting servicemen and Maori men and women.”

Between 1940 and 1945, there are around 200 cases of Māori arrested for being idle and disorderly in the Police Gazette. The majority arrested were aged between 18-22 and were women. Court reports on these cases stressed the women had consorted with servicemen, reflecting the use of the charge to manage women’s social and moral behaviour. Like Hannah, for instance, who was was “one of several Maori girls who had come to Whangarei and were consorting with soldiers.”[4]

In 1941 a young Māori woman was charged with being idle and disorderly. In this case, even though she was living with a Chinese man as his wife, the Gisborne police claimed she was a menace to the community. Co-habitation was a challenge to marriage and an interracial relationship further flouted social conventions.[6]

Terms like ‘menace to the community’, ‘social disease’, ‘living an immoral life’ and ‘associating with servicemen’ were code for sexual promiscuity and commonly used to characterise women arrested for being idle and disorderly.

Charging someone with being idle and disorderly was also used to publicly shame those who were not perceived to be contributing to the national war effort by engaging in regular employment or adhering to manpower regulations. These individuals, if Māori, were often characterised as “lazy”.

If we dig a little deeper into the wider social and economic circumstances of the people themselves we find that these individuals were adhering to seasonal work patterns and in so doing contributing to whānau and communities.

Furthermore, in most instances these were young people who had left home for larger towns and cities and could not find accommodation so they ended up sleeping in public parks, in abandoned buildings, under hedges and in haystacks. They travelled to find work, like the two young men from Coromandel found sleeping in the Frankton haystack, or offended public morals by using public spaces to socialise and drink.

Despite what the police thought, Māori men and women were, in general, not idle, nor disorderly.