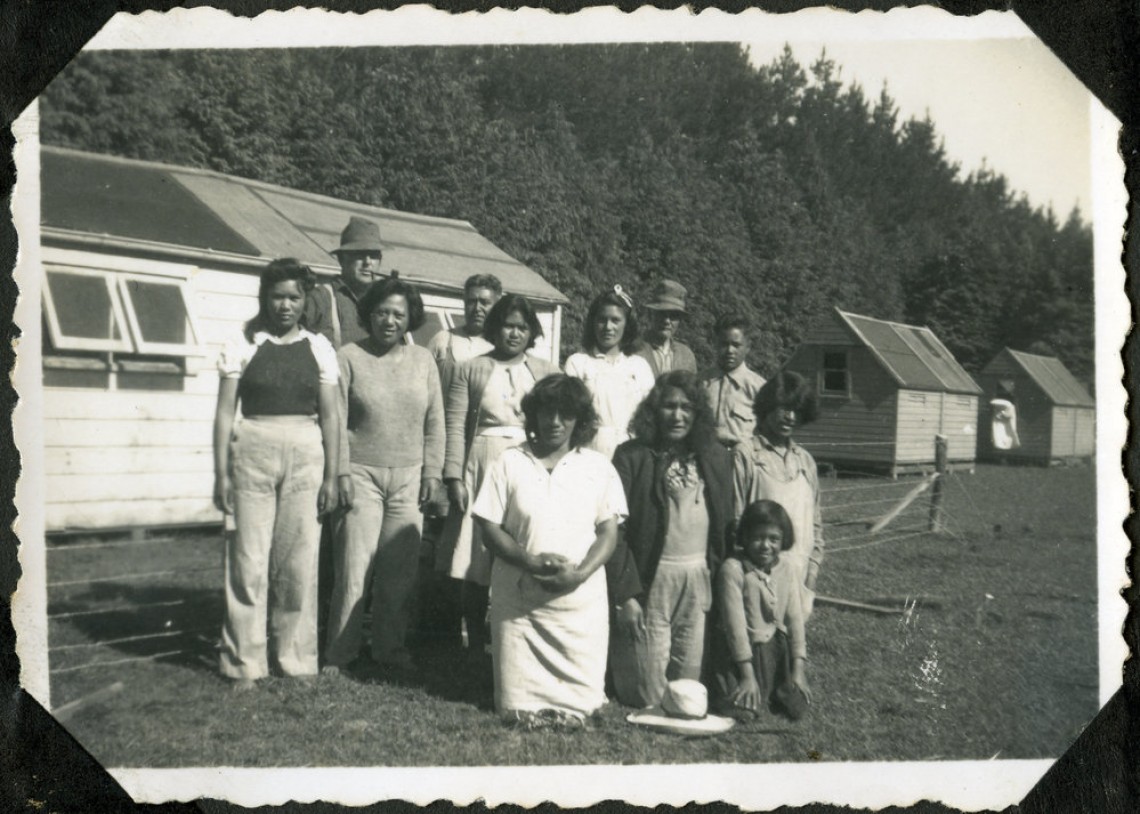 The regulations for industrial conscription, often called ‘manpowering’, were introduced in early 1942. It was grounded on the premise that ‘some industries and occupations were more essential than others’ for the war effort. Government determined which industries this included, and ‘curtailed the freedom of workers to choose their own employment’. Those already working in ‘essential industries’ could not leave without official permission.[1] Meanwhile, workers could be directed to leave their employment for essential work. Workers and employers could appeal against manpower directives before the Industrial Manpower Appeal Board.

The way industrial manpowering played out provides some insights into official attitudes towards Māori and work, the relationship between trade unions and Māori workers, and the role of the tribal committees on the ground in different areas of the country.

The debate about military conscription and Māori was largely settled by 1942: Māori would be exempt. Yet the question of the industrial conscription remained open, especially in the way it applied to Maori women.

That Māori were ‘covered by the Regulations equally with other workers’ was confirmed in a letter from Minister of Industrial Manpower to Member of Parliament for the Northern Māori Electorate, Ratana minister, and minister in charge of the Māori war effort, Paraire Paikea, in October 1942:

As regards those Maoris who continue to maintain their association with their tribes and Maori tradition, that the District Man-Power Officers would seek the co-operation of the elder of the tribe or of any other Maori organisation locally available to him on any points which might arise affecting such Maoris. As regards Maoris who have completely severed their connection with their tribes and traditions it was agreed that they should be treated exactly the same as other workers.[2]

How officials would make the distinction between Maori that maintained an association with their tribes and those ‘severed’ is unclear.

What is clear, however, is that manpower regulations often interfered with the rhythms of whānau economies and seasonal work. Officials expressed concern about Maori women ‘leaving essential industries without the permission of Manpower Office’, an act was ‘appears to be a challenge to the Regulations’.

The Heretaunga Maori War Effort Organisation told Bob Tūtaki of the New Zealand Workers’ Union that it even aimed to ‘test the effects of the Regulations regarding the release of Maoris from essential industries, particularly where the Maori women folk are required to go shearing’.

Before they had the chance, however, Māori workers were challenging it themselves. In October 1942, in Waipukurau, a Māori women lost her appeal to leave the Pukeora Sanatorium against the refusal of the local Manpower officer. Soon after, she left the workplace without notice.[3]

Officials were in a bind: they debated how to conscript Maori labour without fostering opposition. Paikea warned officials that the Government’s approach might create a ‘reaction on the Maori mind [which] will undoubtedly be to construe’ it as ‘straight out conscription’. Instead, control of labour should be ‘left in the hands of the Maori War Effort Organisation… so that in effect the Maori People will be conscripting themselves’. He argued that individual placements in essential industries – or requests to terminate employment -should not operate without the ‘prior recommendation of the local Tribal Committee’.[4]

The concerns about conscription were legitimate. When a manager of the Te Kuiti Line Co. complained that two Māori men would not sign up for either the Home Guard or the Emergency Precautions Service (EPS), officials noted that while there was no obligation to join the Home Guard, there ‘is an obligation upon them to join up with the EPS and take their part in some Civil Defence Duties’. The fear on the part of the two men, officials believed, came from a suspicion that signing up to any schemes might ‘lead to their being called for overseas service and nothing seems to convince them otherwise’. In a letter to Paikea, the official continued: ‘I realise that there are still some traces of anti-Pakeha feeling among the King Country Maoris, and I therefore wish, if possible, to avoid taking the cases to Court, as would normally be done with Europeans who failed to enrol’.[5]

Almost immediately, the Government accepted Paikea’s suggestions of MWEO and Tribal Committee control over Māori manpower direction.[6] H.C. Hemphill, the Liaison Officer for the MWEO, wrote to all Tribal Committees announcing the changes. ‘New Zealand’s essential industries call to all of you to help your Country by working for Victory… You will appreciate that never before has so much direct responsibility been given to the Maori People… Upon the Tribal Committees and Tribal Executive Committees will fall responsibility for organising the industrial side of the Maori War Effort’.[7]

With this, the Government acceded to more flexibility. In regard to Māori girls leaving canneries for the shearing season, for example, it was agreed that they be allowed ‘provided they returned to the Wattie Canneries on conclusion of the shearing season’.

Yet should they again terminate their employment in an essential undertaking again without permission, they would be ‘liable to penalties under the Industrial Manpower Emergency Regulations’.[8] As Hemphill wrote to all the chairmen and secretaries of the tribal committees across the country, ‘nothing is more likely to damage the Maori War Effort generally and to bring discredit on the Maori Race, during this time of stress, than deliberate absence from work without reasonable excuse… workers who so absent themselves must expect the full application of the law’.[9]

Throughout the war, Māori workers appeared for the appeal boards to challenge manpower directions. Such cases are rare and are difficult to come by. But those that we do know about are revealing.

In late 1943, for example, in a sitting of the manpower appeal committee in Dunedin, a Railways Department employee appealed against manpower directions that would see him working at a shearer with the Waikouaiti Primary Production committee. With a wife and five children, and with past experience as a shearer, he knew the wages would be lower, and thus would lose seniority and potential promotion in the Department.[10] The local manpower officer for Dunedin, J.T. Flowers, was surprised by the decision to appeal as he expected a Māori man to show a ‘decided preference for this class of work’.[11] The railwayman’s appeal was dismissed, but something of a compromise was reached: he would be instructed to take up employment as a shearer as directed, but for a period of two months, and could upon completion, return to the Railways Department.[12]

Tribal Committees sometimes took cases on behalf of individuals directed. In 1943, for example, Luke Rangi of the Ngāti Awa committee suggested they take a case on behalf of a university student based on hardship after the student was directed to agricultural  work at Patumahoe. Rangi’s concerns, it seems, was that the manpower office directing the student had overruled the views of the Tribal Committee.[13]

Finally, it was not always Māori workers before the boards. In mid-1944, for example, two Māori men, returned servicemen and carpenters, were directed to work on the Karapiro hydro works. The firm appealed against the direction on the grounds that the cook at Karapiro refused to cater to Māori.

The appeal was dismissed, but the position of the company and the cook provoked a strong reaction. A meeting of the Uenukukopako Tribal Committee protested the appeal. ‘Much has been said of the outstanding exploits of the Maori Battalion’, said Secretary of the Committee, E. Mita. ‘But apparently there are still some Europeans who think that the Maori people are not worthy of the much vaunted “freedom” their comrades died to preserve’. It was ‘unfortunate’, Mita said, ‘smacks of Hitlerism’, and served to ‘spoil the relationship between Maori and pakeha’.[14] The President of the RSA condemned the firm’s position, as did the Carpenters Union. The latter passed a resolution that ‘We wish to associate ourselves completely with the protests made by the Uenukukopaka [sic] Tribal Committee against the discrimination against Maoris at Arapuni’.[15]

In March 1943, Paikea proudly declared before Parliament that the Maori War Effort Organisation (MWEO) had, among other things, mobilised ‘a total of 11,550’ Māori to work in essential industries’.[16] By early 1945, the number had reached 15,000.[17] This was an astounding figure, given that the Māori population stood at approximately 99,000 in that year with 58% under the age of 21.

Historians have recognised the scale of this effort and the important role of the MWEO and the local tribal committees in that effort. Workplace direction and control, according to Richard Hill, were ‘to become the biggest responsibility for the MWEO committee network’.[18] Similarly, Claudia Orange writes the activity that ‘most expanded the responsibility’ of the tribal committee was the ‘wartime need for manpower’. Many were called ‘upon, often at short notice, to fulfil labour quotas for specific jobs’ and in some districts, ‘freezing works and dairy factories could not have operated without such assistance’.[19]

Official reports were similarly rosy about the operation of tribal committees and the mobilisation of Māori manpower. ‘Almost all directions finally issued by District Man-Power Officers have, as a result of the consultative service rendered by tribal committees and Maori Utilization Committees, been accepted without question by the workers concerned’. Describing the Auckland Manpower Office, the report stated 3,000 directions were issues to Maori workers, ‘none of which have been appealed against’.[20]

According to David Littlewood, the proportion of appeals to the manpower committees was very low, by both workers and their employers. This was even more the case for Māori workers, due to the work of the tribal committees under the MWEO.[21]

While they may well have been low, the appeals that we do know about reveal that that the story of mobilising Māori industrial manpower for the war effort was at once more contested and complex than is often presented.