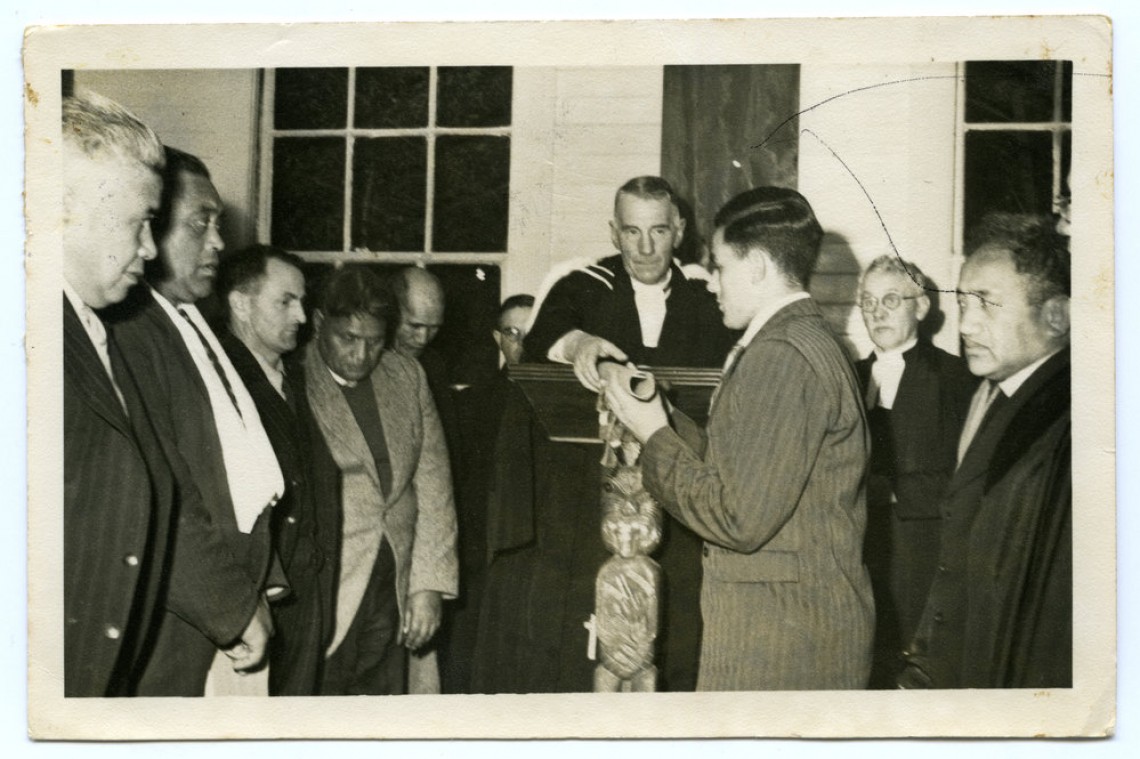 Missionaries learning and preaching in te reo Māori was a fundamental factor in Māori converting to Christianity in the nineteenth century; they also reached out to Māori through print, with the Bible, psalm books, and at times, through Māori-language newspapers and other periodicals.   One such publication, Te Waka Karaitiana, was started by the Presbyterian Māori Mission in the mid 1930s and continued into the 1960s.  In July 1945, it published an article on te reo Māori and what it meant for Māori identity and culture.

Throughout the nineteenth century, most Māori lived rurally in their own kāinga, and spoke te reo Māori.  Although the government instituted its own village schools in 1867, with the express aim to teach English to Māori children, Māori remained the primary language of the home and church in many Māori settlements, at least in the North Island, in the first half of the twentieth century.  But the government’s policies were slowly working, so that some kaumātua were lamenting that some Māori children could no longer understand te reo Māori.  As Rev. Rēweti Kōhere, an Anglican, noted in July 1945, ‘When I preached in the Ohinemutu church a few months ago the Maori vicar asked me to preach in English, otherwise I would not be understood by the young people. On the other hand, elderly Maoris cannot be ministered to by a European clergyman.’[1]  When Rev. T.C. Brash, the Moderator of the Presbyterian Church visited the mission school and community at Waiohau in June 1945, he spoke to the children in English but his sermon to parents was interpreted by Rev. Hēmi Pōtatau.[2]  Māori were already moving to the cities during the war to undertake essential work, but it was clear that this trend would only continue after the war, with further impacts on the Māori language and culture.

The three main Protestant missions to the Māori people, the Anglicans, Methodists and Presbyterians were therefore, by the mid 1940s, suffering somewhat of an existential crisis, as to how increased mixing of Māori and Pākehā might be reflected in the church.  We have discussed this already with regard to the Anglican Church, where the Bishop of Auckland tried to place his Māori priests more under increased Pākehā control.   This was happening as the main Protestant churches, through the National Council of Churches, were discussing avenues for more cooperation, perhaps even union as a single church.  There was also a general agreement among Pākehā at this time, including within the churches, that the assimilation of Māori into Pākehā culture and the English language was not only inevitable, but of benefit to them. If Māori and Pākehā would be increasingly mixing in wider society, what were the implications for the future of Māori missions and churches?  Was it just the language barrier that inhibited fuller communion?  In response, the NCC appointed a Māori Sub-Commission which surveyed interested parties, including the questions ‘In Church life do you favour the blending of the two races? Or should we continue to have separate Maori Churches?’[3]

However the Presbyterian Church was already creating a pathway, when the General Assembly of its Synod in 1944 voted for the formation of a Māori Synod (today called Te Aka Pūaho).  Using the example of the leadership shown within the Māori Battalion during the war and that Māori had also ‘faced up to responsibility at home’, it sought to allow Māori to exercise more leadership within the church.[4]   At this time, the Presbyterian Māori Mission catered to a number of small rural Māori settlements mainly within Tūhoe and the Eastern Bay of Plenty, with a few outliers, such as Nūhaka and Taumarunui.  These were mainly run by Pākehā ministers and deaconesses, under Rev. John Laughton.[5]  The mission had several gifted linguists, Laughton himself who served on the Māori Translation Committee, and Sister Edith Walker, but all clergy were expected to learn te reo Māori.

Rev. Hēmi Pōtatau was elected the first Moderator of the Hīnota, or Māori Synod, which met at the Church’s marae at Ōhope in May 1945, attracting 75 adults and 50 children.  For Laughton, he felt that ‘the work of the Maori Mission would never again be wholly Pakeha’ and that ‘it is now Maori and therefore assured of permanence’.[6]  In his address to the Synod, Pōtatau alluded to his time in the Māori Battalion, and how the Māori soldiers had proved themselves.  Likewise Māori would now run the Synod; just as Māori has supported their soldiers overseas, they must now financially support their parishes and synod.[7]  Te Waka Karaitiana reported that  ‘te reo Māori is the language of the Synod, and the Synod strongly determined that our language should be saved, that it be spoken in karakia, and that all Māori parents be sympathetic to teaching the language to their children, that is because the Māori language is the mauri of Māoritanga; if the language is lost, then Māoritanga will be lost.’[8]  The Synod then formed a committee for committee for publishing material in te reo Māori, using their press at Whakatāne.  ‘One of the main jobs of this committee is to write Māori publications suitable for teaching the people about the complexities of religion.’[9]

The article, “Te Reo Maori”[10] appears in the same issue of Te Waka Karaitiana, and although it does not mention the church or religion directly, it should be read in the context of the challenges to the separate Māori church, and the formation of the new Māori synod.  The newspaper indicates that it was the paper’s editor who wrote the piece.  Given that it talks of ‘tō tātou Māoritanga’ [our Māoritanga], it is unlikely that Laughton, a Pākehā, was the author.  Pōtatau had recently been appointed as deputy editor,[11] so it might have been him.  As the piece says ‘Those of us who are quite good at speaking English know the difficulty of converting some of our Māori thoughts into English’, so it remains untranslated.  It is an interesting text because, written in 1945, does not use many of the words we would expect today; for example, “Māoritanga” relates to mana rangatira, to identity, and to tikanga, depending on context.  Many now would also disagree with the author’s assertion that Māori had given up the hope for rangatiratanga, but again, this was written by a Māori churchman in the 1940s.  What it does show, is that Māori were acutely aware of the danger to te reo Māori and the repercussions its loss would have on Māori tikanga and identity.  It also shows that tīpuna could write complex thoughts in the everyday language that they used at that time.